Neekhil Prasad is an Australia Awards scholar pursuing a Master of Research, 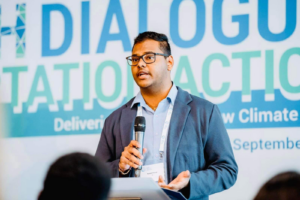 in Global Climate Model Simulation, at the University of Southern Queensland. In early September 2022, he proudly represented the Pacific in the Global Adaptation Summit held in Rotterdam, Netherlands.

Neekhil played a key role at the event. He provided an opening statement and represented the Pacific on a panel discussing how climate change is impacting the Pacific region.

“As a youth from a Small Island Developing State, FIJI ISLANDS, I speak on behalf of one of the most severely impacted regions that are significantly being affected by the impacts of climate change! Endorsed by science, the Pacific is now experiencing catastrophic levels of climate adversities that need urgent adaptation support and action for Climate Justice for a region that has contributed the least to human-induced climate change yet today is pushed to be the most vulnerable to its impacts”.

As an emerging researcher and climate scientist, Neekhil also advocated for the importance of science and research to develop and share better adaptation solutions and policy revisions in Small Island Developing States such as Fiji.

The successful adaptation outcomes of this Summit will be included at COP27 in Egypt and COP28 in Dubai.

The Australian Government (through Australia Awards) is committed to upskilling emerging leaders like Neekhil to influence positive change in key sectors. Neekhil’s participation at the Summit is an example of his commitment to improving Fiji’s preparedness and response to climate change.

Neekhil is grateful to the Australian Government for his Australia Awards Scholarship. He is proud to represent the program, his Australian university and home country (Fiji) in this crucial area!

Neekhil hopes that sharing this experience inspires other awardees to identify opportunities where they too can share their knowledge and represent Fiji’s sustainable development goals, globally.

This site uses Akismet to reduce spam. Learn how your comment data is processed.